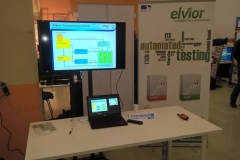 UCAAT 2016 was held in Budapest, Hungary from 26 to 28th of October; 4th UCAAT brought together more than 220 test automation practitioners and researches. During 3 fruitful days test automation specials from industry and academia presented their work: there was 2 keynotes, 4 tutorials and 27 presentations. All presentations are available here. Martti Käärik – Elvior CTO – was co-author and presenter of tutorial “Testing and Domain-Specific Modeling with TDL” and presenter of work “Web Test Automation Using TTCN-3 and MBT Framework”. 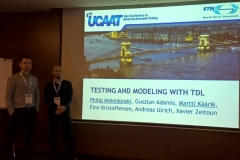 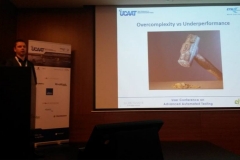 Elvior has released “out of the box solution” for steps above; introductory slides are available here; for more information please contact elvior@elvior.com .

The tender process was worldwide and Elvior was one of the nine companies that qualified in software development environment and test services lot.

Successful participation in ESS tender is considered as a significant benefit for Estonian scientists and IT-sector. They can now create new knowledge and discoveries with access to state of the art science and radiation data.

100 companies around the world tendered for ESS contracts and 29 were chosen as a project partners. AS Helmes and AS Proekspert, also from Estonia, were qualified in software design and development services lot.

Future technologies are developed at international research centers like ESS, which is a joint venture for 17 European countries (including Estonia), that aims to build and maintain next generation science infrastructure for material research with neutrons.

Fourth UCAAT is hosted by Ericsson and Nokia from 26-28 October 2016 in Budapest, Hungary. The event is organized by European Telecommunications Standards Institute.

UCAAT attendees have great opportunity to discover and learn new modern test automation approaches, technologies and strategies. It is a great place for software testing tool vendors to meet their users.