Elvior has done number of case studies over the years. One case study was done in cooperation with Reach-U. The case study was published in the leading testing magazine named Testing Experience.  The case study was conducted to test Reach-U’s Workforce Management (WFM) application, a web-based mobile positioning application developed by Reach-U. WFM is an application that can observe a workforce’s movement history, location and send SMSs to personnel via the web browser client. WFM’s users are primarily companies that would like to track and plan their workforce locations in real time.The architecture of the WFM:The case study was performed to evaluate the applicability of model-based testing for testing web services via functional and load testing – use cases where an operator uses a WFM web-client to locate targets were tested. Only servers that are part of WFM were in the scope of the implementation under test (IUT). A web client was simulated by the test system. It is noteworthy that testing the functionality of the web client was out of the scope of the case study.

The following aspects were evaluated in the case study:

In the case study we used TestCast Generator (a test generator producing TTCN-3 test scripts automatically from the State Model (UML) of the IUT), TestCast T3 (full featured TTCN-3 test development and execution platform) and the JMeter (JMet) load tester. Additionally, a system adapter was developed to communicate between WFM and TestCast T3 as well as the JMeter load tester.

Architecture of the test environment:

WFM is a complex distributed web application consisting of many server applications distributed/duplicated on different hosts and protected by a load balancer from overload situations. The case study demonstrated the feasibility of the model-based testing (MBT) technology using  TestCast Generato for functional testing of an IUT interface over web services. Applicability of model-based testing technology for load testing

In the case study the load tests and functional tests were used in parallel to test the IUT. The case study demonstrated the applicability of the model-based testing in general and  TestCast Generato technology in particular for usage in load tests to increase the quality of overall testing.Moreover, it showed that MBT technology could be used over the borders of traditional functional black-box testing. In the case study the functional tests were generated out of the WFM model and used in conjunction with a load tester in order to prove the expected behaviour of the IUT in case of heavy loads.

For more information about the case study and project please contact us at elvior@elvior.com. 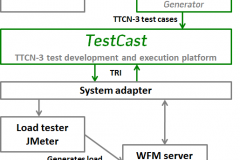 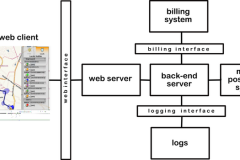